Corrosion damage causes costs amounting to several billion euros each year. In addition to the financial consequences, numerous dramatic damage events can be attributed to corrosion. This can significantly reduce the risk of corrosion occurring and spreading. But more about that later.

The first part of the corrosion guide gives you a general overview of corrosion and the most common types of corrosion on screw connections in the construction sector.
​​​​​​​

DIN EN ISO 8044 describes corrosion as a “physico-chemical interaction between a metal and its environment.” According to DIN, the changed properties of the metal lead to the function of the metal, its environment or the system in which it is installed being significantly impaired.
​​​​​​​

The resulting corrosion products are firmly adhering, loose or soluble. For example, rust forms through a chemical reaction between iron and oxygen. This process is called oxidation: The outer surface layer of the metal absorbs oxygen. This creates an oxygen-permeable oxide layer that can chip off. Over time, the rust can eat its way into the material and break it down, weakening the affected component.
​​​​​​​

White rust is another type of oxidation that can form on zinc-plated components. Beyond that there is also verdigris on copper or oxide coating on aluminium. In the case of aluminium, the oxide coating acts as a barrier between air and metal and prevents further oxidation. This protects the metal from other weather influences. Many corrosion products impair the functional condition of components or systems in the environment. But not all of them are harmful.

In DIN EN ISO 8044 a distinction is made between 56 types of corrosion, four of which are relevant for screw connections in the area of building envelopes and the technical building equipment: 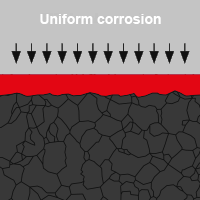 ​​​​​​​A characteristic feature of uniform corrosion is the uniform abrasion of the surface. Here, specific anodic and cathodic areas develop in many places on the metal surface. These can change their position (change of location), i.e. occur continuously in another place. If the abrasion of the surface occurs only locally, this is known as shallow pit corrosion.

Uniform corrosion primarily affects the surface properties and leads to optical impairments. It can be recognised at an early stage and only restricts the load-carrying capacity if the loss of the metal is significant.​​​​​​​ 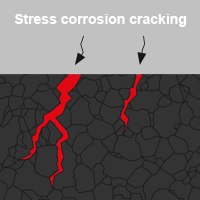 Stress corrosion cracking, on the other hand, is a particularly critical form of corrosion because it damages the material unnoticed, which means that sudden failure can occur. A combination of mechanical and chemical attack can cause cracks in the structure of the material or completely break screws.

There are three main factors that lead to stress corrosion cracking:
The sensitive raw materials here include all copper-zinc alloys (brass), some wrought aluminium alloys and some rust and acid-resistant steels. The attacking agents depend on the raw material. Chlorides affect the rust and acid-resistant steels and aluminium (seawater) and ammonia, sulphur dioxide and nitrate influence the copper-zinc alloys.

There are two different types of stress corrosion cracking:

Anodic stress corrosion cracking occurs primarily on many stainless steels. Upon contact with oxygen, these form a thin oxide film - so-called passive coating - on the surface, which actually protects against further corrosion. If stainless steel is used in highly corrosive atmospheres such as swimming pools (containing chlorine), the passive coating can be damaged. This means there is no longer any inherent protection, so that the basis material can be attacked. Existing preinduced cracks can expand and reduce the load-carrying capacity of the screw until it falls below the critical cross-section. The screw joint is no longer secure.

In contrast, there is cathodic stress corrosion cracking (hydrogen induced embrittlement), which occurs in particular on case-hardened screws. Due to the accumulation of hydrogen in the screw material, the load-carrying capacity of the screw can be exceeded when tensile stress is applied, causing the fastener to break spontaneously.​​​​​​​​ 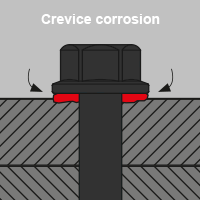 Crevice corrosion occurs in narrow, open crevices without sufficient air and fluid exchange. The differences in the concentration of oxygen in an electrolyte in the gap result in corrosion elements. Then, anodic and cathodic areas develop locally. Due to the lack of oxygen supply, the medium can become more aggressive at the corrosive point and thus locally accelerate the corrosion. Even stainless steel can corrode in crevices if there is no oxygen available to restore the attacked oxide coating. The connection of screws and nuts as well as open welding seams can promote crevice corrosion if the material is unsuitable. Crevices that occur with overlapping surfaces and ledges are also particularly at risk.

We will deal with how crevice corrosion can be avoided in a separate guide part in the near future. 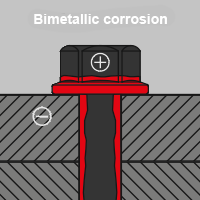 Bimetallic corrosion occurs when two or more metallic materials with a certain potential difference come into contact. Due to the different potentials of the two raw materials in connection with a conductive electrolyte, e.g. water, the surface of the less noble metal corrodes.

Prerequisites for bimetallic corrosion are​​​​ ​​​​​​​
This type of corrosion becomes noticeable in everyday life when components made of, for example, stainless steel, brass or copper are combined with screws, nuts or rivets made of less noble metallic materials. The so-called galvanic corrosion can therefore be avoided through professional selection of raw materials or appropriate galvanic isolation.​​​​​​​​
DO YOU HAVE ANY FURTHER QUESTIONS?

Also ​​​read the other parts of the corrosion guide and learn more about the topic of corrosion.
​​​​​​​

Read also our other guides for more information.

Our corrosion brochure shows you ways to avoid corrosion damage.