After we have dealt with the different Types of corrosion in the first part of the corrosion guide, the second article will talk about the possibilities of preventing corrosion damage.

Corrosion protection includes all measures that help to avoid corrosion damage to metallic components. In addition to corrosion-resistant materials, there are many coatings that increase the level of corrosion protection. Let's look at these options in detail:​​​​​​​

Selection of the raw material

Raw materials that prevent corrosion include, for example, non-ferrous metals and rust- and acid-resistant steels. The latter are also commonly referred to as "stainless steels". The materials for screws designated as corrosion resistant include, among other things, the corrosion-resistant stainless steels according to DIN EN 3506 and the national building authority approval Z-30.3-6.

Stainless steels form a self-restoring surface layer, the passive coating. This protects the base material from corrosion. A sufficient oxygen concentration is necessary to create a passive coating.

Note on the combination of different raw materials

Selection of the coating

With a suitable coating, a surface is considered to be "corrosion protected". The use of such coating is another way of reducing corrosion damage.

The most common metallic coating for fasteners is galvanic zinc plating (5–10µm) with subsequent passivation. For galvanizing, the workpieces are immersed in a zinc electrolyte and chemical and electrochemical processes take place. In the subsequent passivation phase, an additional protective layer is created on the metal, which prevents or greatly slows down corrosion.
Background knowledge
​​​​​​​Passivation is a chromium-containing oxide coating that is available in different variants. The version with chrome (VI) oxide has proven to be very corrosion resistant, but is toxic, which is why this process must be ruled out. In accordance with the specifications of the REACH directive, EJOT uses only chrome(VI)-free coatings and passivations. The REACH directive is considered to be one of the strictest chemicals acts in the world. It stipulates that approval permits are required for the use of dangerous substances. Chrome (VI) oxide may no longer be used without a corresponding permit since 2017.
The subsequent sealing with a so-called topcoat protects the zinc layer from the White rust corrosion and additionally increases the corrosion protection.

Overview of the performance features and advantages:

Zinc lamella coating is a non-electrolytic coating, which consists of a so-called inorganic basecoat and a topcoat.

The b​​​​​​​asecoat can be a zinc lamella coating, which consists predominantly of zinc and aluminium lamellae. It is applied directly to the metal part. This base coat determines the anti-corrosive properties. The zinc it contains provides a high level of cathodic protection against corrosion. The topcoat (sealing) additionally complements the properties of the basecoat. In addition to corrosion protection, this top coat protects against chemical and mechanical effects and is responsible, for example, for weather resistance and appearance. The combination of both is called Duplex-coating.

Overview of the performance features and advantages:​​​​​
This process is used wherever excellent corrosion protection is to be combined with other functional and decorative properties.

Zinc lamella corrosion protection was originally designed as a chrome VI-free alternative to galvanizing. It has established itself due to the wide range of possible uses for a wide variety of applications. 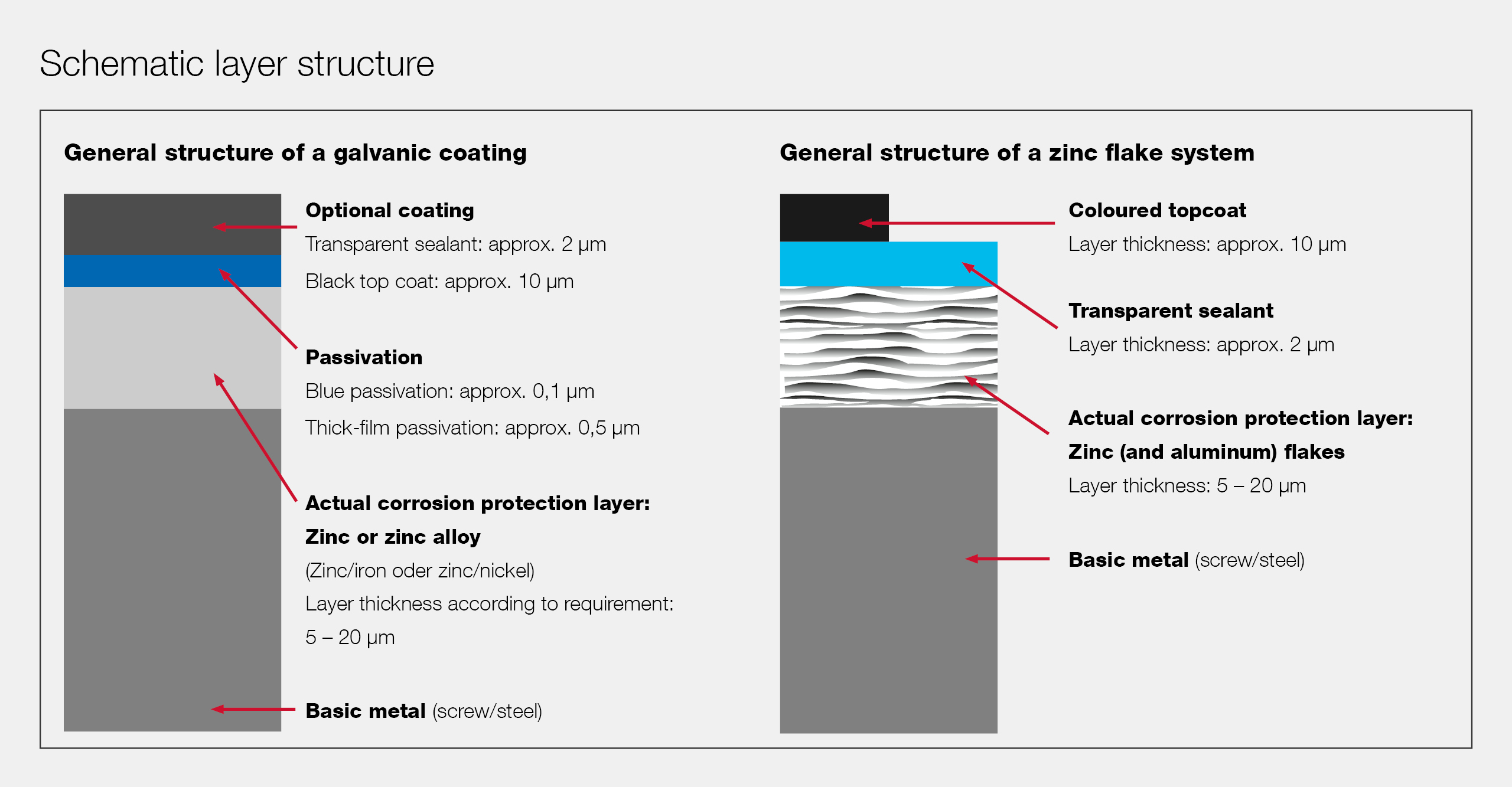 In addition to galvanizing and zinc lamella coating, there are other types of coating. These include hot-dip coatings such as hot-dip galvanizing and mechanical coatings. However, due to the partially high layer thicknesses, these are less suitable for self-tapping and self-drilling screws in the construction sector.

Thanks to the combination of specially coordinated coatings, the EJOGUARD surface offers excellent corrosion properties. With a resistance of one thousand hours in the salt spray test according to DIN EN ISO 9227 and 15 test cycles passed in the Kesternich test (corrosion test with sulphur dioxide and water) according to DIN 50018, the application range of steel screws is significantly expanded depending on national regulations.

DO YOU HAVE ANY FURTHER QUESTIONS?

Read also our other guides for more information.
​​​​​​​

Our corrosion brochure shows you ways to avoid corrosion damage.