Flat roofs have become indispensable in the industrial environment. They are economically attractive, are walkable and allow an optimal use of space without slopes. Our new guide series on flat roofs will deal with the various facets of this special roof shape.

In the first part of our new guide, learn everything about the basics of planning a flat roof. What is the difference between a flat roof and a pitched roof? How is a flat roof constructed and which loads and forces have to be taken into account?
​​​​​​​

In the case of roof covering, the roof skin consists of individual components such as roof stones, roof tiles, small-format shingle-shaped components or large-format panel-shaped components. They are not waterproof, they just drain the water away. They are therefore called impervious to rain. The minimum roof pitch of roofs with roof covering is known as the standard roof pitch and ultimately depends on the materials used. Roofing can be made of different materials, such as concrete, brick, wood, straw or metal.

On roofs with waterproofing, the roofing membrane is seamlessly sealed with strip-shaped materials. This is normally done on roofs with a low slope. Although there is no clear information about the slopes of flat roofs in the German Building Code, the Flat Roof Directive recommends a slope of at least two percent or 1.1 degrees. The optimum is five percent or 2.9 degrees. DIN 18531 "Roof waterproofing" classifies flat roofs into slope group I with a slope of up to three degrees and slope group II with a slope of three to five degrees.​​​​​​​
​​​​​​​

A conventional flat roof structure is made up of the following: The upper layer is the waterproof layer. It normally consists of a single-layer plastic or bitumen membrane (a). A wide variety of materials such as PVC, TPO, FPO or EVA can be used in a plastic roof membrane. They usually have an internal thread to ensure the mechanical characteristics. With bitumen membranes, multi-layer systems are also possible.
​​​​​​The second layer is, optionally and depending on the use and the fire prevention requirements, a heat insulation layer (b). Conventional insulating materials on flat roofs are PIR, PUR, EPS or mineral wool. The thickness of the insulating materials varies from 20 mm to 600 mm, for example in cold stores.
A vapor barrier layer (c) is installed between the substrate, the so-called load-carrying layer (d), and the thermal insulation layer. This can also be made of diverse materials. The basis for a flat roof is the load-carrying layer. In Germany, 80% of load-carrying layers are made of trapezoidal sheet steel. The trapezoidal load-bearing shells normally have a thickness of 0.75 - 0.88 mm. Other substrates can, however, be made of wood or wood-based materials, concrete, lightweight concrete and aerated concrete. The substrates vary internationally and regionally. For example, the share of load-bearing layers made of concrete is much higher in southern European countries like Italy or Spain.
​​​​​​​

The original position of the round metal stress plate is still clearly visible. The roofing membrane has been ripped out along the fastener. From this we can deduct that the wind suction stress, and thereby the force applied to the attachment point, was too large. A reduction of the fastener gap reduces the stress applied to the fastening point and thereby also reduces the risk of damage. 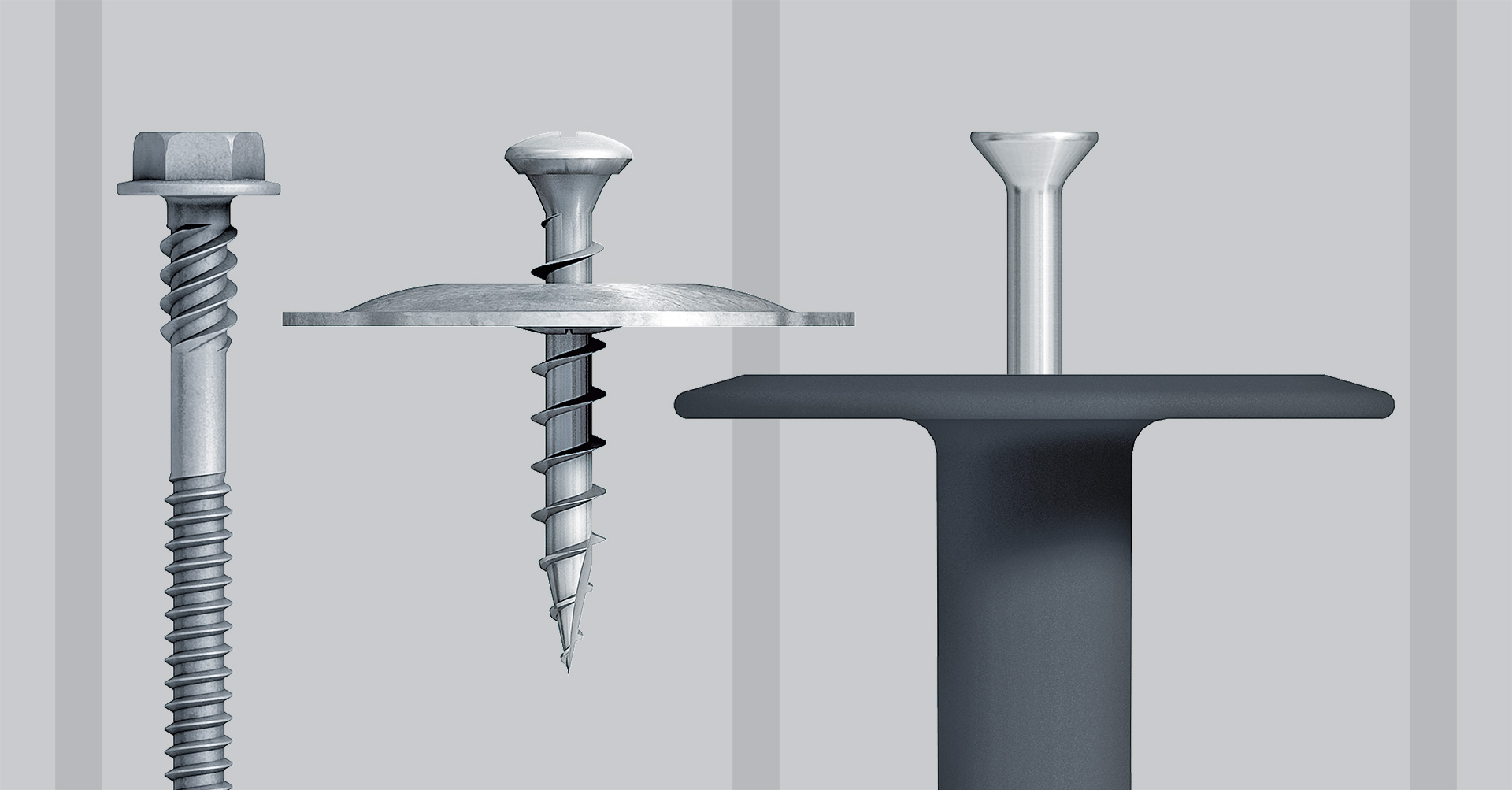 ​​​​​​​There is a range of requirements which a fastening element must meet for flat roof applications. In addition to the static function with regard to tensile strength, the physical properties of the building also play a role, taking into account the minimization of thermal bridges. Also, greater state-of-the-art corrosion resistance is required. If plastic fastener combinations are installed, the ageing resistance has to be certified as well. Depending on the insulating material used, attention should also be paid to the fastener combination with regards to resistance to imposed loads. Good plasticity with the same, high quality standard, if need be also mechanically or in the form of pre-stored fastener combinations, complete the list of requirements on mechanical flat roof fastening elements. In the next part of our flat roof guide we will look at the various types of securing the position of roof waterproofing membranes.
DO YOU HAVE ANY FURTHER QUESTIONS?

You can also inform yourself in our corrosion guide all about corrosion.

GUIDE IN THE FIELD OF SELF-DRILLING SCREWS

GUIDE IN THE FIELD OF HEAVY-DUTY ANCHORING

​​​​​​​You can also inform yourself in our heavy-duty anchors guide all about anchoring technology.
​​​​​​​

As a fastening specialist, EJOT offers a variety of flat roof fasteners for different substrates.